Version 1 was powerful enough for most users but it was still limited in possibilities and growth. Version 2 is a major rewrite where the main concepts have been expanded to allow much more flexibility and give users unprecedented control over their automation. The beauty of the platform is that users can now share their automation scripts and benefit from the knowledge of the community.

Programming is now available and it opens a new world of possibilities. Non-programmers need not worry: you don’t have to be able to program but you will still get the benefits from the improved platform. The first advantage is that a trigger can now do a lot more. Instead of the simple trigger

you can now do

See the Programmer’s Guide for detailed information on how you can program your trigger. You can still define simplified triggers using the condition and action editor the same way as before version 2. You can also define an advanced trigger that will use code you define in Javascript. 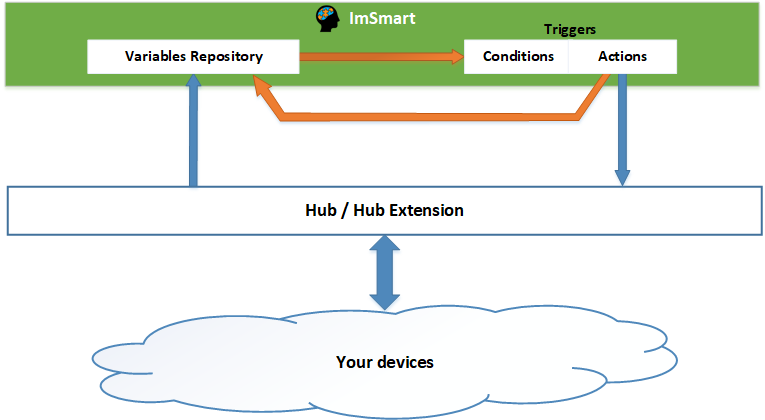 What is a module?

A module is program code that can be reused and is executed by a trigger or a connector action. A module can be imported in connector code, in a trigger or even from another module, using the function ImSmart.import. A module can be made public so that it’s available to all users that wish to use it in their own modules, connectors or triggers. See the Programmer’s Guide for more info.

What is a connector?

A connector is a module with access and actions components. A connector allows an ImSmart account to access integrations through a hub or a hub extension. For example there is a IFTTT connector which allows the use of Maker Webhooks API calls. A connector defines remote access parameters (mostly credentials) and how to deal with them. A connector also defines a set of actions that triggers can use to accomplish something. As soon as a connector becomes public, its full definition is available to everyone, including how it is coded so you  can verify and understand what it is doing and also use it as an example for programming your own connector.

Let’s see how a connector is defined.

The Access type defines if your connector you have in development is accessible to other users or is completely private; as soon as you publish a connector, this version becomes public and is accessible to all users. If you make your connector semi-private, the only way they can access it is by programming a trigger and access it through your developer nickname and connector name. More about this later.

Then you describe the connector using a rich editor that allows you to format the description to your needs.

On this first tab, the last part is the Connector Script, which defines the core of the connector. The code you define here is exactly what will run when an action using the connector is triggered and nothing more. It’s up to you to define what you need to call, including what to record in the logs. The code uses the Javascript language which makes it very easy to use and very powerful at the same time. Although it is possible, connector code should not reference any specific variable as it should be made generic. All connectors and modules run in a self-contained environment where your variables as well as connector parameters are pushed in so they are available to the script.

The Description field is part of all access definitions. All other fields are defined as connector parameters. The Variable Name defines the variable that will be injected into the validation script, if any, to validate the parameters entered by the user. Encrypted means that the user value is encrypted in database and shown as a password input on the UI. Mandatory means that the user has to enter a value. This will tell the UI to validate that a value is present. Selecting Mandatory should not prevent you from implementing a check in the validation script so the back end also checks for a value. Unique means that the value should be unique for this user and connector. Parameter Help Text defines the text that is displayed to the right of the field that will help the user understand what value s/he should enter.  You should keep the Help Text short. A rich text editor allows you to format the text: select any part of text and a floating toolbar appears. The Validation Script is executed when the user creates or updates the credentials to make sure all data entered is valid. The validation is done by using the variables as defined by Variable Name. Anything to report to the user should simply set the variable _error.

Publish your module or connector

If you’re serious about your work and want to make your module or connector public you simply need to publish it. By doing so you push your current working module/connector version on the public side your your working version number is incremented.

Any connector publish goes through an approval process at ImSmart where we check the following:

If your connector does not follow the requirements, we will ask you to update it and publish again.

When your connector is published and approved, you cannot change its code or definition; you can only make a new version and publish it again.

All ImSmart scripts run in a self-contained environment where you cannot access any UI or DOM elements. Nevertheless it makes a very powerful and flexible tool. All scripts are time-restricted to 3 seconds. If the script runs longer than 3 seconds, it is aborted and a script timeout is recorded in the trigger activity logs.

All variables defined in ImSmart, either in your Variables repository or in the definition of a connector must follow the ECMAScript 6 valid grammar. Avoid operator keywords as well as ImSmart and _ImSmart in your variable names.

The object ImSmart is accessible and contains the following functions:

For example, ImSmart.access(‘IFTTT’, ‘Key’, 1) will return the access Key #1 which is needed in a WebHooks call.

We have a good example in the following IFTTT script:

An object _ImSmart also exists for core functions but only acts as an interface to the ImSmart object. You should generally avoid using this object directly.